Skip to main content
You are currently impersonating the user: ().
Blog
12 Dec 18

A mismatch between the growing climate crises and underinvestment in mitigation solutions such as renewable energy means more investment will be needed to boost the resilience of agriculture, put up seawalls and sure up water supplies.

Climate adaptation has remained largely overlooked and underinvested. The Climate Policy Initiative estimates that total adaptation finance from all government sources was only $22 billion from 2015 to 2016.

Now, investment funds and vehicles that target adaptation solutions are beginning to line up to move significant amounts of capital.

Climate financing is top of the agenda at the United Nation’s annual conference on climate change (COP 24) gets underway in Katowice, Poland. Three years ago, nearly every country signed the landmark Paris Agreement on combating climate change. One outcome of the Paris Agreement was that developed countries were urged to mobilize $100 billion annually by 2020 to help developing countries tackle global warming. It is increasingly clear that government budgets alone will not be enough to reach this goal. Mobilizing billions will require bringing in the private sector.

Such “blended finance” has already moved some $48 billion into climate action through 139 blended finance deals (average size $40 million) since the early 2000s, according to Convergence’s database. 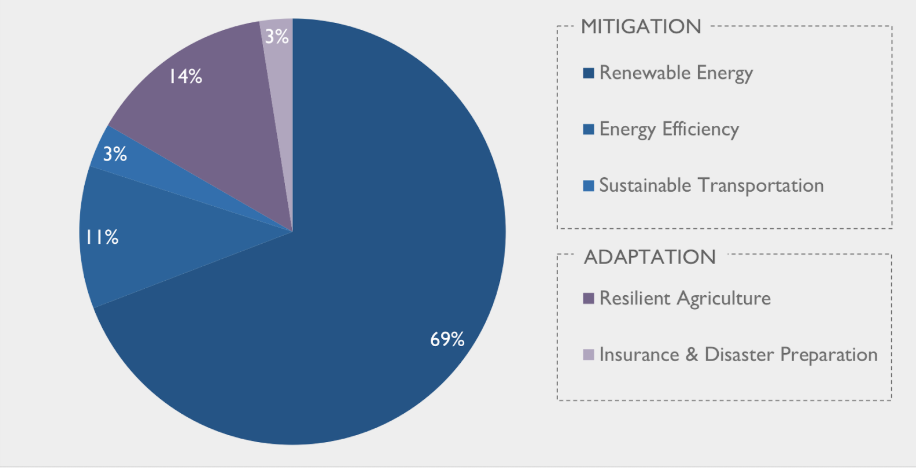 Adaptation to climate change is increasingly falling within the remit of local governments, burdening developing countries with new costs (seawalls and beach nourishment) and increasing the costs of existing responsibilities (roads, drainage and water supply).

Blended finance can and does attract commercial capital to adaptation sectors in emerging markets, including climate-resilient agriculture, water supply conservation and management, and weather insurance, among others.

The InsuResilience Investment Fund (formerly the Climate Insurance Fund) from KfW, the German development bank, for example, is a tiered fund with a sidecar technical assistance facility that contributes to climate change adaptation by improving access to and the use of insurance in developing countries.

Convergence has supported the development of blended finance solutions for climate mitigation and adaptation, most recently partnering with the Development Bank of Southern Africa (DBSA) and the Coalition for Green Capital (CGC) to develop the Climate Finance Facility, a ‘Green Bank’. Convergence is also supporting NatureVest in the design of a Blue Bond that will increase spending for conservation and climate adaptation activities.

Renewable energy is the low hanging fruit for climate change action. Politically, prioritizing renewable energy allows for developing countries to meet the targets laid out by the Paris Agreement while maintaining focus on their critical national development objectives, including achieving universal energy access.

Practically, renewable energy really does hold strong potential to mitigate a significant portion of the impact of climate change. The International Renewable Energy Agency (IRENA) published a report in 2017 showing that clean energy could achieve 90% of the energy-related CO2 emission reductions required to meet the central goals of the Paris Agreement.

The Cross Boundary Energy I, for example, is a blended finance fund that leverages a small layer of first-loss funding from USAID to catalyze private investment in on-site solar generation for businesses in sub-Saharan Africa, including a recent deal with Unilever to install and operate a 600kWP solar power plant in Kericho.

The importance of global action to combat climate change is more important today than ever before. Global carbon dioxide (CO2) emissions are on the rise again.

After remaining relatively flat between 2014 and 2016, CO2 emissions reached a record high of 53.4 gigatons of CO2 equivalent in 2017. If we continue on this path, the cost of adapting to climate change in developing countries alone could rise above $280 and $500 billion per year by 2050, a 2016 estimate.

Blended finance for climate mitigation is well positioned to scale, with a proven track record around renewable energy and energy efficiency projects in low-income countries. There is also great potential for blended finance approaches for climate adaptation, but we need more early-stage concessional capital to pilot and develop innovative blended vehicles that target adaptation.

At COP 24 this year, we hope the potential of blended finance for both mitigation and adaptation will arise as a key issue and catalyze a larger move towards innovative financing solutions for climate action.