Skip to main content
You are currently impersonating the user: ().
Blog
03 Feb 21 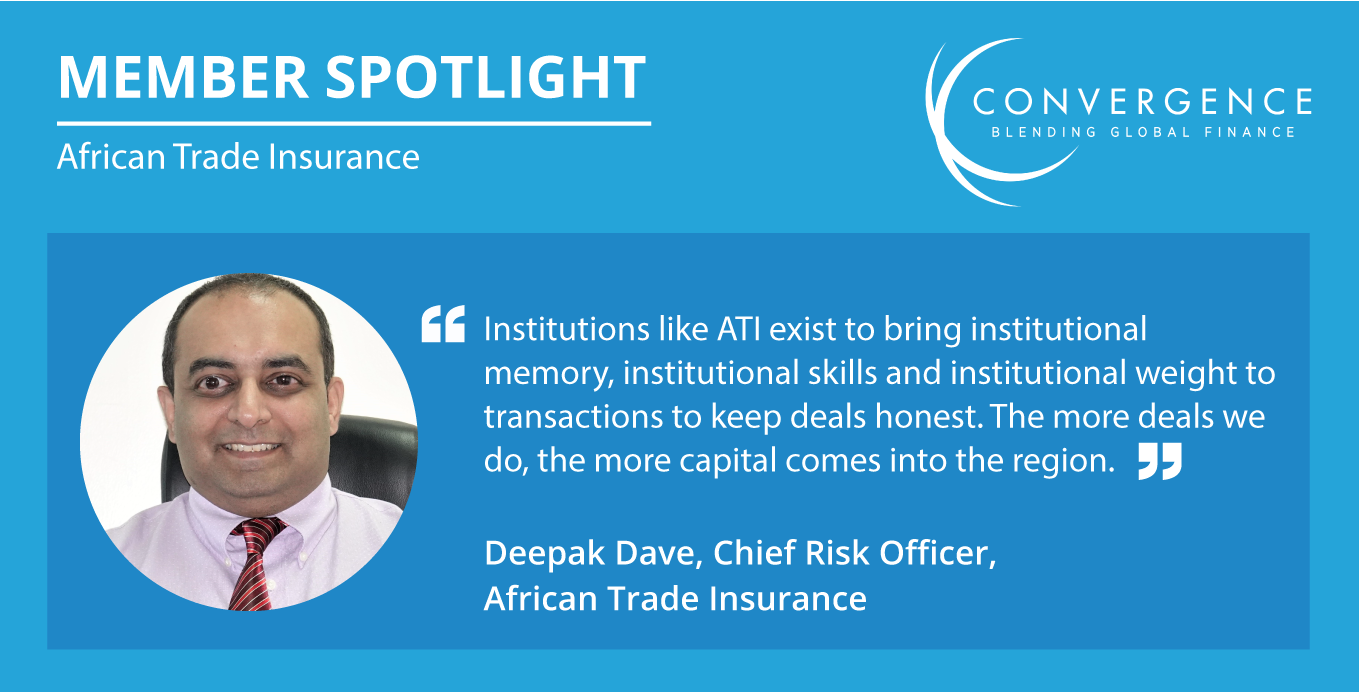 The African Trade Insurance Agency (ATI) is a pan-African institution founded and owned by African countries that works for governments, investors, lenders and companies doing business in the region. ATI provides political risk and commercial trade and credit insurance covering risks such as expropriation, non-honouring of sovereign and sub-sovereign obligations, currency inconvertibility and embargoes.

Unlike traditional private insurers, ATI remains a development finance institution that uses insurance products to increase foreign and domestic capital flows into development in Africa. ATI is the only such insurance company in the region, rated A by Standard & Poor’s (S&P) and A3 by Moody’s, just below the African Development Bank, and higher than almost all African governments. Most importantly, ATI has Preferred Creditor Status (i.e., given priority for repayment).

Given ATI’s aim to increase foreign investment into Africa, and its unique position to influence the flow of trade and capital on the continent, Convergence connected with Deepak Dave, ATI’s Chief Risk Officer, who joined the management team earlier in 2020, to better understand the company’s approach to strengthening investor appetite and increasing investments that offer both financial and social returns in the region.

Through its various insurance products, ATI plays a critical role to encourage business in Africa, and the mobilization of private capital towards sustainable development in the region. Can you tell us more about this coverage selection and what sets ATI apart from others?

ATI provides assurance to private capital providers funding projects or transactions, that their capital will be protected against perceived esoteric risks associated with doing business in Africa. ATI’s participation does not substitute concessional or donor capital, rather acts as an additional means of attracting private capital into blended transactions. For instance, if you look at our financial capacity, 70-80% of it is devoted to sovereign finance, which includes guarantees to companies that supply African governments and government-backed institutions, against the real and perceived risks of doing business with African institutions, and, insuring private capital placed in government debt issuance, state owned entities, government bonds, capital market bonds, or preferred share issuances, through credit enhancement.

In terms of what sets us apart, it is a combination of ATI being one of the highest rated financial institutions in Africa and our expertise of local markets, preferred creditor status, regional governments and government relationships. This is also what encourages private global reinsurers to do business through us, because if things turn bad, they are better off than if they were participating as a private financier. That same brew of positives comes into play when a commercial bank operates in the capital market and works with ATI.

And, because the majority of our shareholders are African sovereigns, ATI operates under the principle that it will only enhance the participation of private capital in transactions that meet both a financial and social need.

How does ATI help its clients navigate political exposure?

Take, for instance, a Canadian company seeking to sell its 30 MRI scanners to a private Ghanaian hospital that is part of an Indian hospital chain. In this scenario, nobody knows anybody, but ATI is more likely than not to have done business with the Indian company, the Ghanaian hospital and government, and the Canadian company. In this scenario, like the many we face, ATI is often the sole participant that has a strong familiarity of all players involved, and the economic, political and social conditions that will influence decision-making and the success of an investment in Africa.

Institutions like ATI exist to bring institutional memory, institutional skills and institutional weight to transactions to keep deals honest. The more deals we do, the more capital comes into the region.

With regards to the Africa Energy Guarantee Facility (AEGF)–set up by the European Investment Bank (EIB) and Munich Re to promote private investment into the energy sector, where ATI provided investment insurance. Could you tell us more about ATI’s role?

For some context, around 2014, EIB was driven to support the export of European expertise in renewable energy to Africa by financing European firms aiming to build out renewable energy-related infrastructure, renewable energy power supply, and/or related technology or services across the continent. The inherent concern was that the European SMEs were extending themselves into the African region and would face risk of non-repayment from African sovereigns. Given EIB did not have preferred creditor status with African governments, it decided to support European businesses in Africa with public money.

ATI served as the front for capital coming from abroad to achieve a dual aim – mobilize private capital and increase renewable energy across the continent. ATI managed the private and public capital as the local bank financing renewable energy projects; locally accessible to insurance banks, asset managers, and other African entities. Effectively, our participation guaranteed foreign investors and capital providers investing in Africa protection against expropriation, nationalization, and government action that may harm the viability of a transaction post-facto, hence the term guarantee.

How has the COVID-19 pandemic further compounded the region's risk factors and what counter-cyclical role has ATI played?

COVID-19 has hurt the revenues of many governments. Unlike developed countries, where much of the revenue comes from taxes and corporate profits, a higher proportion of revenue for African countries is generated through import duties, export fees, and corporate profits from sovereign owned transportation businesses (e.g., airlines and railways). COVID-19 put a halt on the transport of passengers and goods, and stilted the provision of services, such as tourism. Consequentially, governments have had to cut budgets on social expenditure, weakening the budgets allocated to education and healthcare, which in any case are chronically underfunded sectors in much of Africa. Lastly, COVID-19 has decimated remittances from the diaspora and international tourism receipts. This capital evaporation has happened all at once, restricting foreign exchange.

By our very definition, ATI does not behave counter-cyclically. We simply do not see the cycle; we operate right through it. When time came for us to provide immediate support, ATI leveraged its reputation and ratings to maintain the flow of capital to continue financing the development of hospitals and mobilization of Personal Protective Equipment (PPE). Our rating enabled us to put our name behind the importation of goods we know will be paid back over a different tenor than tolerable by private short-term capital.

The people who know Africa well have never wanted to stop investing in Africa, or feared investing in the region. The people who do not know Africa well often want their hand held as they are led through the thicket to success. That is what institutions like ATI have achieved some scale doing well. It is a key reason why ATI joined Convergence after I came on board as Chief Risk Officer. We wanted to ensure the institutions on Convergence’s investor platform interested in doing business in Africa, who are less familiar with the landscape, equally unfamiliar with the development banks as they are with the country in question, had exposure to ATI and access to us, primarily to help reduce their risk of investing while increasing their investment success.

In your view, are insurance products adequately sized and priced, and how do you see their demand evolving to match the evolving macroeconomic environment in the region?

The amount of capital that is willing to sit behind insurance in this region is somewhat finite, because we are insuring the first losses institutions take on a transaction. We would love there to be greater capitalization. With that said, given our accreditor status, rating, and skill in maintaining relationships with governments and corporates in the region, we leverage our capital several times over. So, for every dollar that is invested in ATI, we provide $15 or $18 of coverage. In comparison, a bank offers $8 for every dollar invested. This amount of leverage comes at a price. We do not have to provide concessionally priced insurance to attract transactions. ATI has never felt pressured to drop its prices, and I do not believe we would feel pressure even with the presence of comparable institutions in the region.

The landmark African Continental Free Trade Area (ACFTA) will be a game-changer for intra-African trade and is now the largest free trade area in the world, with a combined market size of USD 2.5 trillion. What role will an organization like ATI play in driving greater volumes of trade in the region and where do you see Blended Finance being utilized to that end?

Firstly, if the free trade area gets to a point where it is not just a set of visions on paper, but a driving force that leads African countries to change the ways in which capital and goods flow across borders, which has not yet happened because ACFTA is very new, then it is going to be a very large economic bloc, which will increase business and the flow of goods and capital, introducing a larger number of companies for ATI to insure.

Secondly, in my view, capital coming into Africa up till now has not been primarily driven by the Africa story, but by foreign countries. This may change with ACFTA, if operationalized, as investors will be able to entertain investing in multiple countries versus pursuing projects on a country-by-country basis.

So, we are optimistic. When African countries operationalize the treaty, we will play on that bigger pitch.

What are some of the challenges facing ATI? And where do you see Convergence working to facilitate greater capital flows into the region?

ATI works with the largest banks across Europe and Asia, and so is very well known to institutions in these regions. Where we have had difficulty is breaking into a market like North America, as more than most businesses in this region have shown less interest in Africa. The ones that are keen (e.g., big mining and energy firms), know us well.

From North America, there is not enough direct financial investment and trade investment into the African market. When it does happen, it happens through Europe. For example, we often have a U.S. pension fund that owns Zambian government bonds through its asset manager in Europe who abets credit enhancement from ATI on those bonds. So, the pension fund in the U.S. has no idea who ATI is or what we are doing to make the deal investible in the region. A focus for us right now is to increase foreign direct investment from North America into Africa. We joined Convergence last year because we believe Convergence can provide us the exposure we need to create strong partnerships with investors in North America and bridge the gap between the needs on the ground and foreign investor interest and activity.

Are you interested in becoming a member of Convergence's global network for blended finance? Sign up today.